Homepage / I am so OCD

Most of us have said or heard someone say this phrase before, whether referring to a color-coded closet, “floors you could eat off of,” or liking your car really clean. While people who have OCD can be organized and clean, the difference between using OCD as slang vs. OCD as a diagnosis is whether that person is experiencing obsessions and compulsions. Those living with OCD are caught in endless loops of anxiety and fear that are hard to alleviate and are commonly not rooted in logic. Many people dealing with OCD have unwanted and intrusive thoughts of harming themselves or others, inappropriate and unwanted sexual or religious thoughts, and fear of losing control, just to name a few.

So then… what is OCD really?

For example, Riley, a 21-year-old who has been diagnosed with OCD, has trouble getting to work on time due to her “fear loop” created by her diagnosis. Riley’s fear loop starts with an obsession that sounds like, “if I don’t start my car three times in a row before driving away, something terrible will happen to my engine, and I will crash.” So, Riley carries out the compulsions by starting the car three times to soothe the fear and anxiety the obsessive thought has caused. Finally, Riley starts to pull away, and then another obsession says, “well, what if you didn’t do it right the first time?” The fear and anxiety grow, and she repeats the compulsions until the compulsion satisfies the obsession, or Riley chooses to face her fear and drive away even though it wasn’t just right.

Why should we stop using OCD as slang?

OCD is not an adjective like the phrase, “I’m so OCD,” would lead you to believe. It is not a personality trait, nor is a person defined by their OCD diagnosis. While speaking about any mental health diagnosis, it is important not to reduce a person to their diagnosis–it is just one part of who they are.

We also do not want to dilute, simplify, or invalidate the experience of OCD. People with this disorder struggle with severe feelings of anxiety, fear, stress, and worry that impact their day-to-day functioning. While the severity of OCD can vary greatly, the symptoms leave people with this diagnosis more vulnerable to low self-esteem, depression, and suicidal ideation. The good news is, OCD is treatable with medication and mental health therapy!

Lastly, we do not want to spread false information about what OCD is. In Japan and the USA, only about 2% of the population is clinically diagnosed with OCD (Ishikawa et al., 2014). Many people with OCD are ashamed of their obsessions and intrusive thoughts and worry they will be poorly judged by others or even arrested, and so they live in silence, struggling alone with their fears. Having awareness around how you use the phrase “OCD” is a great start! For anyone struggling with OCD, please reach out to TELL Counseling and the Lifeline; we promise you will be supported and not judged.

Tips to support someone diagnosed with OCD and other information can be found at: www.iocdf.org/ and www.beyondocd.org/

The stories are incredibly unique and nuanced. Yet a thread of similarity strings them together. Despite the country one finds themselves in, the echo of 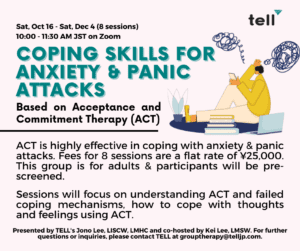 “Learn coping skills for anxiety and panic attacks, based on Acceptance and Commitment Therapy (ACT).  Presented by Tell’s Jono Lee, LISCW, LMHC and co-hosted by

Most of us have said or heard someone say this phrase before, whether referring to a color-coded closet, “floors you could eat off of,” or 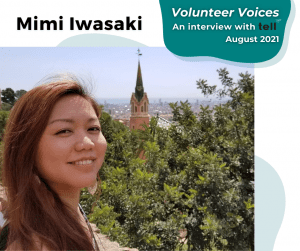 Read TELL Volunteer Voices with Mimi: Why Mental Health? What does it mean to you? Mental health is just as fundamental as my physical health.